Reebok is best known for sports apparel, but the company also produces fitness equipment – including a popular range of exercise bikes. In this article, we’ve reviewed five of the best Reebok bikes to help you make the right choice for your budget, fitness level and requirements.

Reebok is  a brand that needs no introduction. The company is one of the most popular sports apparel and training gear manufacturers, with products ranging from running shoes to punching bags.

What can you expect from a Reebok bike, though?

Reebok exercise bikes tend to be mid-range models in the £200-£500 price range. They are mainly upright, although there are a few spin bikes too. Most models are designed for the average home user, with 7kg-10kg flywheels, but can handle moderate intensity workouts. You can also expect an LCD display with workout programmes, hand pulse sensors and various other functions.

Until recently, the ZR8 and ZR9 were the core bikes in the Reebok range. These have now been replaced by newer models (see below), although the ZR10 is still in production. The current range includes models like the ZJET 430, A4.0, AR Sprint, Jet 100, GB40s and GSB.

It’s worth mentioning that older Reebok bikes often had issues with durability and design. The quality has improved in recent years, however, with most Reebok bikes now providing strong designs and great value for money.

One drawback is that it can sometimes be difficult to find all Reebok bikes in the UK. The most popular models tend to be sold in major stores, such as Argos or Amazon, but others aren’t always available.

Tip: To view the best exercise bikes from any brand, check out our page at https://thehomegym.co.uk/exercise-bikes/.

Choosing a Reebok exercise bike isn’t always easy. There are a wide range of models, and many people still recommend the discontinued ZR8 or ZR9 bikes. That’s why we’ve put together a simple comparison of the best models currently sold in the UK.

One of the most popular Reebok exercise bikes – and my #1 pick – is the GB40s One. It’s a low/mid-range electromagnetic bike that features a durable design, 19 user programmes and excellent value for money.

What makes this such a highly rated bike though?

The GB40s One has a 9kg flywheel, which is relatively heavy for a bike in this price range. Heavier flywheels allow for more intense workouts, so this certainly isn’t a bike just designed for beginners and light cardio sessions. It’s an electromagnetic bike, so you can adjust resistance (32 levels) via the console, rather than using a friction knob.

It also has an adjustable seat (both angle and distance from handlebars), along with pedal straps and self-levelling pedals. Getting a proper fit is essential for avoiding injury – especially during long or intense workouts – so these features are essential for any serious bike. There is no option for adjusting the handlebars though, which is something to keep in mind.

The console has a 5.5″ LCD display. This allows you to select a workout programme, such as target time, distance, watts control or even a user defined programme, along with displaying metrics like speed, pulse, and RPM. The display also shows your power output in Watts, which is a more advanced metric not found on many entry level bikes. Everything on the display is clear and intuitive, so you won’t need to refer to the manual every time you want to change a setting.

Other features include transportation wheels, hand pulse sensors, a recovery program and water bottle holder. The bike has a maximum user weight of 120kg, which is around average for this price. It’s also relatively easy to put together in around 30 minutes, with clear instructions and not too many fiddly steps.

There are a few drawbacks though. As with nearly all bikes in this price range, the seat isn’t comfortable enough for long rides. You’ll probably want to replace it with a gel saddle. There’s also no “real” built-in holder for a tablet or phone, as using the providing ledge blocks the display.

Even so, the bike feels smooth and quiet to ride, has a wide range of pre-set programmes and is adjustable to your height. It’s an excellent model for the price. 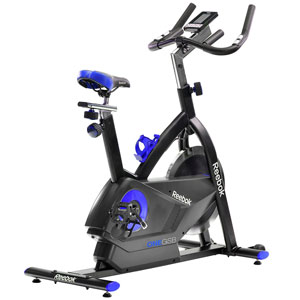 The GSB is one of the most expensive stationary bikes in the Reebok range – but don’t let that put you off. It’s a durable model with a heavy flywheel, so it’s designed for intense workouts (including in a standing position).  If you’re looking for the best Reebok spin bike, the GSB is the one to get.

One of the great things about the GSB is that allows for a wide range of workout positions. This lets you target different muscles groups, in the same way that you would train on a road bike.

It also has a heavy 18kg flywheel. This extra weight, along with 32 electronic resistance levels, makes the GSB excellent for intense cardiovascular workouts.

Of course, if you’re not used to riding on a road bike, then the layout of the GSB may feel less comfortable. For spinning or other aerobics classes, however, it’s a better option than a regular upright bike.

Other features include digital console, 19 built-in programmes and a heart-rate control mode. The console also displays metrics such as time, distance, watts, heart rate and speed. It’s worth noting that most spin bikes (see our list on this page) use frictional resistance that can’t be adjusted via the digital display, so the GSB is an advanced model in this regard.

A downside of the flywheel is that the bike is heavy to move. This isn’t a complaint, as a heavier weight reduces wobbling when pedalling at speed, but is something to keep in mind if you want to move the bike a lot. The display also isn’t as advanced as most upright Reebok bikes, although you expect this from a spin model.

So, if you’re looking for an electromagnetic spinning bike for indoor training, the GSB is a great choice. It’s durable, suitable for intense workout, and enjoyable to ride.

If you’re looking for something a bit more advanced than the GB40s One without paying a fortune, the GB60 is an option to consider. It has many of the same features, but with extras such as USB input, self-generated power, and redesigned control panel.

The GB60 is an upright Reebok exercise bike that shares many of the GB40s’ features. It only has a 6kg flywheel, but is designed for quiet operation, has 32 resistance levels, and a variety of built-in programmes.

One of the differences between this and the GB40s is the control panel. It has a slightly larger and clearer LCD display, along with a round button layout for adjusting the settings. This displays speed, calories burned, pulse (via the handlebar sensors), and time, while allowing you to choose from 20 workout programs. The phone/tablet stand is also placed in a more convenient position, as your phone won’t cover the display.

An interesting feature is the self-generated power. It needs to be plugged in initially, but after the bike is charged it can be used for an extended time powered by your pedalling, meaning you don’t need to place it near a plug socket.

As with most exercise bikes, the seat isn’t comfortable on long rides, so you’ll need to replace it. It also can’t generate the difficulty to match the GSB, although this is normal for an upright bike with a lighter flywheel.

It’s hard to recommend this model over the GB40s though. It has a lighter 6kg flywheel, and the same resistance levels and functions. The only real difference is the self-powered design and improved digital display, which we don’t think is worth the extra money. It’s still an excellent bike though, so if you can find it on sale or for a discount it’s worth considering. 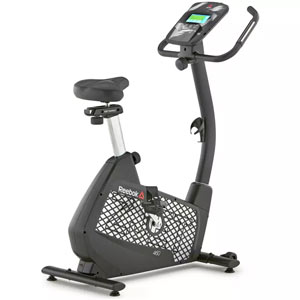 The Reebok ZJET 460 is one of the more recent Reebok bikes released in the UK. It’s quickly become a popular model that’s more expensive than the GB40s, but with adjustable handlebars, Bluetooth functionality, and several other important features.

The ZJET 460 has all the features you’d expect from a mid-range exercise bike, including a durable design, 19 user programmes and 24 electronic resistance levels. It also comes with both an adjustable seat and handlebars, along with pedal straps and a hand pulse sensor.

As you would expect from a newer Reebok model, the ZJET 460 has more advanced connectivity options. These include built-in Bluetooth connectivity, which can sync with the Reebok Fitness App, along with a 5.5″ LCD screen. It also has a 9kg flywheel and 120kg maximum user weight.

There are some drawbacks in comparison to the GB40s though. To start with, the GB40s is cheaper, yet has the same weight flywheel and many of the same features. If you don’t need Bluetooth connectivity, the GB40s may be a more economical choice. The manual also isn’t as clear as we would like for a mid-range Reebok exercise bike and it only has 24 resistance levels.

So, who should buy the ZJET 460 instead of the GB40s? If you need adjustable handlebars, or want to be able to connect to the Reebok app for more features, the 460 is a decent option. We think the GB40s provides better value though. 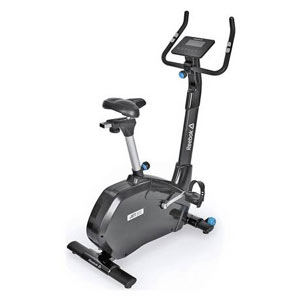 The Reebok Jet 300 is available for an affordable price, yet still comes with a 6kg flywheel and 21 pre-set programmes. It also has plenty of resistance levels for customising your workout, along with a self-generating power system.

The Jet 300 is a magnetic upright bike with a stylish digital control panel. The panel allows you to select from 32 resistance levels and 21 programmes, so it should provide a challenge for intermediate riders. There’s also a variety of displayed metrics, such as distance, watts, speed and RPM.

Other features include an adjustable seat, self-levelling pedals and a 6kg flywheel. The bike has a maximum user weight of 135kg and weighs 34.1kg.

Interestingly, the Jet 300 has rechargeable batteries that are powered by your pedals. This means it doesn’t always need to be plugged in when in use – at least after the initial charge.

It’s also relatively quiet. Just ensure that all the screws are properly tightened, as even a small amount of give can make it noisier than necessary. At around 35kg, it’s also not too difficult to move around the house. The assembly process is a bit more fiddly than we would like, although it’s far from the worst bike in this regard!

The Jet 300 is more expensive than the GB40s – what do you get for your money? The newer console is certainly an upgrade. There are also more user programmes and the self-generating power system. The lighter flywheel on the Jet 300 means the GB40S is probably the better choice for intense workouts though.

Even so, if you’re looking for an exercise bike for steady state cardio or mid-intensity workouts, the Jet 300 provides good value for money.

Reebok exercise bikes are generally durable, smooth and quiet. Most fall in the low/mid-range price category and provide excellent value for money.

Which should you buy though?

We hope this article has helped you choose the right Reebok exercise bike for your home gym. If you have any questions, please let us know in the comments below.