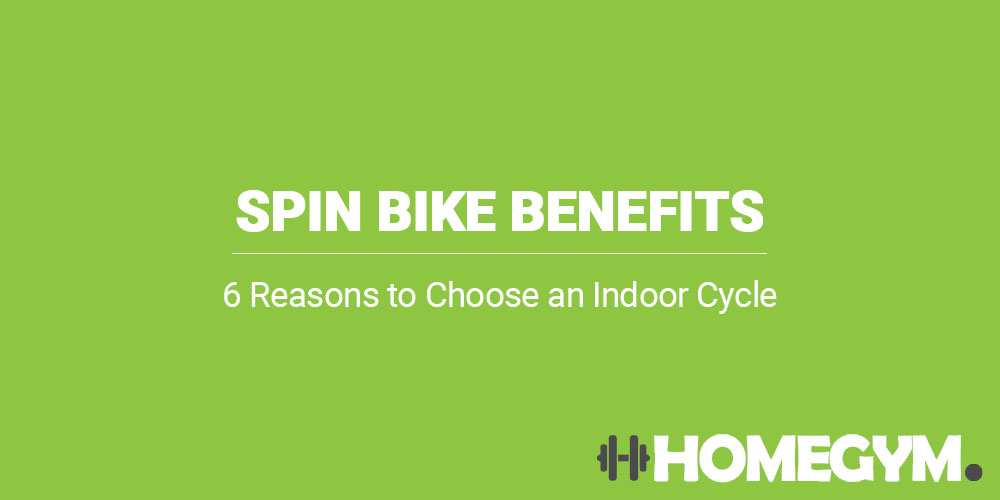 All exercise bikes provide a similar cardio workout. But the intensity and features you need determine the best type of exercise bike.

In this article, we’ll go through six of the advantages to buying an indoor spin bike.

Note: The benefits below are common to most spin bikes, but not all. It’s important to check the features and quality of a bike before you buy.

What Exactly is a Spin Bike?

There are three common types of stationary bikes. These are:

Spin bikes, also known as indoor cycles, mimic the body position of an outdoor bike. This means they work similar muscle groups, making them a great option for training.

They also have heavier flywheels, a stable design for standing hill climbs, and a challenging maximum resistance.

6 Reasons to Buy a Spin Bike for Your Home Gym

Indoor spin bikes are built for speed. If you want to push yourself with high-intensity workouts, then a spin bike is nearly always the best choice.

There are several reasons for this. Spin bikes make it easier to ride out of the saddle, which is important for most spinning classes. They typically have higher resistance levels and a heavier flywheel, for more challenging workouts. Spin bikes also place rider in a better body position for intense riding.

Most spin bikes come with dual-sided pedals. These have a cage on one side and SPD clips on the other.

Both cages and clips allow you to pull the pedals, which activates more muscles of the leg during a pedal stroke. While cages are fine for beginners, most spin bike enthusiasts quickly graduate to the SPD system, as they provide more security and reduce wasted power.

Not all indoor spin bikes have SPD pedals though. The NordicTrack S22i, for example, is a premium bike that only has caged pedals. It’s relatively easy to swap the pedals on most bikes though.

3. Stable Out of the Saddle

If you want to be doing fast climbs out of your saddle, then spin bikes are the safest and most comfortable choice. Spin bikes are heavier than uprights and often have a wider base for extra stability.

With that said, you should still be careful when doing high-intensity workouts standing up. Don’t go over 90 RPM out of the saddle, increase the resistance for more stability, and make sure the bike is levelled on a flat surface.

Indoor spin bikes typically have a perimeter weighted flywheel. This means that the flywheel picks up momentum as you pedal, which mimics the feel of riding an outdoor bike.

Most indoor spin bikes also have much heavier flywheels than upright alternatives. Some of the best models have a large 20kg flywheel, which improves stability and smoothness, while allowing for a more difficult workout.

Spin bikes generate resistance either through friction or magnets.

Frictional resistance is the most common type for spin bikes. A frictional pad, combined with the heavy flywheel of most spin bikes, provides a high maximum resistance.

The downside to frictional resistance is that it’s not easy to know how much resistance is being applied, making it difficult to replicate your workouts. This is also why many entry-level or mid-level spin bikes often don’t provide a power output metric.

This isn’t the case with magnetic resistance. Resistance is increased by moving the magnets closer to the flywheel, so the same resistance setting will always generate the same difficulty.

You’ll need to pay for a premium spin bike if you want magnetic resistance and a power output metric though. This is because it’s easier to generate high levels of resistance using friction, which is essential for a spin bike.

One of the most obvious differences between an upright bike and indoor bike is the body position.

Indoor bikes closely mimic an outdoor bike, with a seat and handlebars that are roughly the same level. This places the rider in an aerodynamic position, which is useful if you’re an outdoor cyclist who wants to train similar muscles.

The best spin bikes also have multiple adjustment points, so you can get the right fit for your body shape. These include the saddle position, saddle height, and handlebar position.

What Are The Benefits of Indoor Cycling Classes?

Indoor cycling classes are one of the most popular types of cardiovascular exercise.

These challenging classes typically last for 45-60 minutes, with an instructor leading you through hill climbs, speed bursts, and recovery sections. The great thing about these body workouts is that they typically involve both aerobic and anaerobic training, which is one of the main benefits of spin classes.

You should check with your doctor before starting indoor cycling classes. Spin biking is challenging, so take it slowly and don’t push yourself too hard to begin with. Make sure you stay hydrated, and listen to your body if you notice pain or soreness!

While people often take spin classes at a gym, there are now many apps that stream professional-standard indoor cycling classes. Popular examples include Peloton and iFit, although there are many excellent options.

And, as you probably guessed, an indoor spin bike is a much better choice for these workouts than an upright or recumbent.

So, what are the health benefits of an indoor cycling class? Some of the most important advantages include:

Just like any form of cardio exercise, you’ll need to cycle regularly to gain the most benefits and reach your fitness goals. Three 45-60 minute high-intensity interval training (HIIT) classes per week provides the best results for most people.

Spin bikes aren’t the right choice for every home gym. But they are often the best option if you want a high-intensity workout that’s similar to riding an outdoor bike. Spin bikes also provide plenty of resistance and enough stability for standing hill climbs

If you think a spin bike is the right choice for your home gym, take a look at our guide to the best indoor cycles.